skip to main | skip to sidebar

Running through more than 20 housing properties was interesting - in the real meaning of the word. Initially I had decided to concentrate on more central locations, after having received good hints from the relocation agents and colleagues. With the guidance of professional agents I started my home-hunting: eager to see whether I would find a place where I could picture myself for the coming two years.

What perhaps most surprised me about the Indian flats was that most of them have a separate entrance and a separate Indian-kind-of toilet for maids and servants. Certainly something that I had never encountered before! Another feature which surprised me was that in the kitchen there is no designed space for a dishwasher - the answer being that "we have maids instead"! I guess maid-hunting will follow once I am settled=)

I saw lots of flats: many of them beautiful and spaceous, some of the located on more peaceful strees, some of them amidst construction sites, some of them in truly luxurious compounds, some of them more designed for families. Most of them were also above my budget: I was told that in the past 6 months the rents have been going skyhigh because of increased demand on expat standard housing. I was told that in Chennai there are 6000 foreigners, out of which 3000 are Koreans - due to the establishment of two Korean automobile factories in town. -

On the 4th day I was taken to a suburban area near the Elliott Beach, by the so-exotic-sounding Bay of Bengal. I immediately liked the neighbourhood. And there is more to come: the moment I stepped in the property of Sharanya House I knew! This is where I would like to live. It simply looked so much like me! - The day after I met the landlady, a charming Chennaite lady whose excellent taste shows so clearly on the place. She said, in the south-india way that I believe I am going to love: "I feel that we are going to be friends".

Now back in Finland, undoing my beautiful Helsinki home, rummaging in cupboards and going through memories, I have much better understanding what bits and pieces I want to have with me in India. - I will soon meet the couple who will rent my Helsinki home and I am determined to greet them with the same warmth as my Indian landlady met me: want them to feel at home here the same way!
Lähettänyt Silva in India klo 23.25 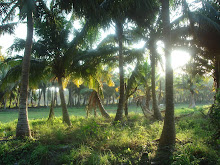 We met an elephant in Delhi!

Silva in India
a Finn in India,wanting to share the experience of a lifetime of getting "indianised"